"The Toxic Vermin" Crabullus is a boss in Blaster Master Zero, appearing as the mutant boss of Area 2. It later reappears as a mid-boss in Area 9.

Crabullus vaguely resembles a large crab. It has a green head with four red eyes and two yellow pincers, an orange shell with a mouth on top that has 16 teeth, twelve short legs, and a pair of green claws attached to green arms, each composed of six spiky segments.

Crabullus initially appears as the mutant boss of the Residential Area. Defeating it grants the Crusher Shot, which allows SOPHIA III to destroy certain blocks. Another room also opens up at the top of the boss arena. Inside this room is Eve, who is passed out. Upon finding her, Jason takes her to SOPHIA III, and she sticks with him throughout his journey to find Fred (and eventually defeat the Underworld Lord).

Crabullus appears a second time in the Alternate Dimension Area as the first boss of a three-boss dungeon holding Key 4 (the other two bosses being Antibody Cell and Venom Master).

Crabullus remains stationary in its acidic puddle in the center of the arena; however, it can rotate to face the player. Crabullus can attack by spitting acid from the mouth on its back, leaving purple puddles on the ground that damage the player if walked over. Afterward, it fully extends its arms to both sides and begins to rotate around, periodically shooting green spiky balls from its mouth; after shooting six spike balls, it will move its claws back into position and stop rotating. It can pull its claws back slightly before ramming them forward. It can cover its face while looking at the player and then shoot three energy projectiles from its mouth, cover its face again, and then shoot three spiky balls from its mouth. Crabullus can also cover its face for a period of time, serving as a defensive maneuver.

The only way to damage Crabullus is by attacking its head; its shell is immune to all attacks. Its punching attack can be avoided by moving to the side or standing right in front of its face (certain angles make this easier to perform), as Crabullus will not adjust its angle when readying the attack. Its rotation attack can be dealt with by rotating along with Crabullus, being careful not to step into the acid, avoiding the projectile attacks, but also being close enough to the center of the arena so as to have enough angular velocity to avoid the extended arms. The player should be somewhat cautious when Crabullus covers its face, as it can either perform the spitting attack or is just covering for defensive purposes. Crabullus’ claws can be damaged and destroyed temporarily, limiting its attack options to spitting energy projectiles and spike balls from its mouth or spewing acid until its claws regenerate.

Using Reflect, Jason is able to nullify any of Crabullus’ projectile attacks, more so if performing a perfect reflect, which fully surrounds Jason and sends back a more powerful projectile. Getting rid of Crabullus’ claws also makes the battle significantly easier, as it removes all of its physical attacks.

Crabullus is weak to Penetrator, causing it to be stunned for a period of time and taking more damage than usual; Penetrator also allows Jason to damage both its claws and head at the same time. Using Penetrator’s extra damage and stun alongside all of the Ignition Bombs can make quick work of Crabullus, defeating it in less than 10 seconds.

Crabullus is immune to all Gun types except Blaster and Reflect. If Jason has Reflect, he should use the perfect reflect often, as it surrounds all of Jason and sends back stronger projectiles. Sub-weapons should be used to get rid of Crabullus’ arms, as this means Crabullus’ main attack will be to shoot projectiles from its mouth, which can then be reflected back.

If Jason does not have Reflect, he will have to resort to using the Blaster and his available Sub-weapons. Ignition Bombs can do damage very quickly, but can only be used effectively at point blank range, limiting the amount of time the player has to react to Crabullus’ attacks; Grenades are a safer, but slower option. Ideally, these Sub-weapons should be used only to destroy Crabullus’ arms (in addition to simultaneously damaging Crabullus himself); once the arms are destroyed, the player should resort to using the gun and strafing to shoot Crabullus while avoiding its projectiles. The player can also opt to not destroy the arms (or at least, not both of them), allowing Crabullus to perform its punching attack, which is optimal to begin attacking it with the Blaster (especially if it only has one arm, making the attack easier to avoid); however, this risks Crabullus performing its rotation attack, which is usually the most difficult attack to avoid taking damage.

The following list shows how many shots it takes from each Gun and Sub-weapon type to defeat Crabullus. Stun means Crabullus will be unable to act for a brief period of time; weapons can only stun every so often in order to prevent the boss from being stun-locked. Weak means Crabullus will take twice as much damage from the Gun than usual; in-game, they flash red, and are also stunned, when this occurs. Sub-weapons do double damage against bosses compared to enemies to mitigate their limited ammo.

Crabullus appears as the mutant boss of Area 2. Attacking the mouth on its back is the only way to damage it, and its arms cannot be destroyed. It stays near the top of the arena, moving left and right, as well as slightly up and down. It periodically shoots projectiles from its mouth four at a time, and also outstretches its arms, which are composed of four segments with a claw at each end. Staying at the very bottom of the arena allows the player to avoid its claws completely, although the player will be forced to get closer if the Gun is not upgraded.

Crabullus is susceptible to the Grenade Glitch, meaning if the player can get up close, successfully throw a Grenade into Crabullus’ mouth on its back, and then pause the game when Crabullus is taking damage from the Grenade, Crabullus will take continuous damage from the Grenade explosion while the game is paused, resulting in an easy victory. However, the same glitch can be applied to the player, who can also take continuous damage while the game is paused if attacked at that moment.

Crabullus appears as the mutant boss of Area 2. It is described as a “towering, grotesque crab.” Like all of the other mutant bosses, Crabullus is actually a projection instead of a mutated crab. It attacks Jason by stretching out its pincers and shooting spheres from its mouth. 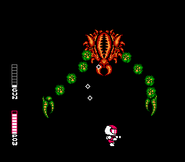