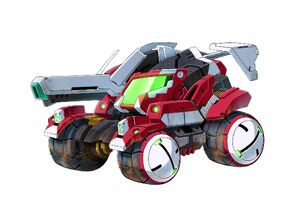 Gaia-SOPHIA (stylized: "G-SOPHIA" or "GAIA-SOPHIA") is the core playable battle tank of Blaster Master Zero 2. Built using parts of SOPHIA III and Sophia Zero following the events of the previous game, it is once again piloted by Jason in his search to find a cure for Eve's mutant infection.

On top of boasting the same mobility and firepower of the original two tanks, Gaia-SOPHIA is designed with near-perpetual space travel in mind, capable of deriving energy from any kinetic impact thanks to the Gaia System.

As the first Earthling-made Metal Attacker, it is designated with the model number EARTH MA-001.

Derived from an unspecified accident, this integral system allows Gaia-SOPHIA (as well as Giant Lola and Dragon Attacker, the battle tanks of Copen and Empress in EX Character Mode) to supplement SP restoration from capsules (10%/40% SP for small/large capsules) with continual energy recharges via kinetic contact with planetary surfaces. In gameplay terms, this translates into recharging the SP bar by falling from considerable heights or coming in contact with enemies or hazardous terrain (the latter does not necessarily have to cause damage; using the Burn Spark to destroy or pass through an enemy typically refunds the cost of the attack).

While the Gaia System is functioning normally, landing on a surface after falling for 6-9/10-13/14+ blocks generates 10%/25%/100% SP on impact by default, without regard to G-SOPHIA's actual downward velocity at the time of impact. However, a number of events can prevent falls from granting full SP upon termination:

Though impacts with the ground are the safest means of generating SP, impacts with enemies and other hazards will also engage the Gaia System. Taking non-lethal damage from any source generates 15% SP, regardless of the amount of Life lost, while ramming into enemies or walls during a Burn Spark tackle generates 10% SP per impact.

Unlike its predecessors, Gaia-SOPHIA does not passively regenerate SP over time. Rather, whenever SP is totally depleted, the Gaia System shuts down temporarily, preventing the activation of Main weapons, Sub-weapons and SP-consuming Maneuvers while causing SOPHIA to regenerate 10% of maximum SP per second until SP is fully restored (after 10 seconds by default). During a shutdown, as indicated by the vehicle losing most of its color, the MA gains double SP from all sources, both impacts and SP capsules, while being actively controlled, allowing SP regeneration to be expedited significantly:

Until the Gaia System restarts, Gaia-SOPHIA takes double damage from all sources and can only defend itself using a shutdown-specific Normal Shot with 1/10 the power of G-Crusher Shot. Upon reaching maximum SP while in shutdown, SOPHIA produces a pulse of energy, dealing 12/5 G-Crusher Shot damage and knocking Hard Shells off-balance, and regains all normal functionality. (Entering a top-down view dungeon will force-restart the Gaia System without producing a restart pulse.)

On top of its gameplay uses, the Gaia System also channels energy to Eve to arrest her corruption; her dependency is such that she cannot leave the co-pilot seat of Gaia-SOPHIA, but she can still perform as the team's support droid, and can be spoken to in SOPHIA's Weapon Select Screen (also referred to as a sub-screen) for tips and trivia as in the previous game.

Hard-won mobility upgrades from SOPHIA III are standard equipment aboard Gaia-SOPHIA and may be toggled on and off in the Maneuver section of the MA's Weapon Select Screen.

The many munitions installed stock on Gaia-SOPHIA or unearthed along its voyage include interesting twists on the previous models' weapons.