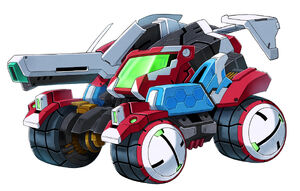 Gaia-SOPHIA SV (stylized: "G-SOPHIA SV" or "GAIA-SOPHIA SV") is the core playable battle tank of Blaster Master Zero 3. It is an upgraded version of the original Gaia-SOPHIA, built using parts from the lost Andreia.

On top of boasting the same mobility and firepower of the original Gaia-Sophia, it has an improved SP system, which can power two systems at once. SP is once again charged via the Gaia System.

After the events of Blaster Master Zero 2, Jason and Eve repaired and improved Gaia-Sophia using parts from the lost Metal Attacker Andreia, which had saved their lives during the final battle against Drolrevo.

Gaia-Sophia SV is capable of many of the same abilities and firepower as the original version. The biggest change is the addition of two SP meters instead of one. The Orange meter powers Cannon shots and weapons, while the Blue meter powers Sub-Weapons and Abilities. This allows the player to use more powerful weapons without sacrificing mobility or vice versa. As before, SP is generated via the Gaia System.

As Gaia-Sophia SV ranges out without maintenance, sparks and electric crackles become more and more pronounced as additions to its side-scrolling sprites. During the final battle with Bloodstained Planade-G, Gaia-Sophia SV is pushed to its limits and eventually shuts down, forcing Jason to confront the final boss on foot.

At the beginning of the game, Gaia-Sophia SV is stripped of most of its mobility upgrades. New and returning abilities are discovered throughout the game, and may be toggled on and off in the Maneuver section of the MA's Weapon Select Screen.

The game begins with Gaia-Sophia SV stripped of many of its previous armaments, but new weapons are discovered throughout the game.