“The Abyssal Predator” Hard Shell is a boss in Blaster Master Zero, appearing as the mutant boss of Area 5. It later reappears in Area 9.

Hard Shell initially appears as the mutant boss of the Man-made Sea Area. Defeating it grants the Dive Gear, which allows SOPHIA III to navigate through water with ease.

Hard Shell appears again in the Alternate Dimension Area as the first boss of the dungeon holding Key 5 (the other two bosses being Crabularva and Spark Salamander). Defeating the armored boss mutant this time opens three portals along the right side of the arena (including the return portal to the dungeon's entrance), with only one ultimately leading to the Key.

Hard Shell’s main attack is spewing bubbles from its mouth, one of which can form a wall of bubbles. Afterward, Hard Shell will usually sidestep to another intersection in the arena. When Hard Shell’s eyes turn blue, typically when it detects that Jason is trying to approach it from the rear, it’ll move around the arena faster and blow bubbles more rapidly. When Hard Shell’s eyes turn yellow, it will refrain from blowing bubbles and quickly move around the perimeter arena; eventually it’ll try to line up with the player and then charge, where it’ll be stunned upon ramming into the wall.

Hard Shell’s bubble attack is not particularly hard to avoid if the player keeps a fair distance away; even then, the bubbles it spews can be destroyed. While it has green eyes, Hard Shell spews out nine bubbles, the ninth of which is always set to make impact with one of the walls and form two layers of bubbles to obstruct the player; destroying this bubble prevents the bubble wall from appearing. When Hard Shell’s eyes turn yellow, the player should try to follow it around to prevent from losing track of it; Hard Shell will briefly pause before attempting to charge the player head-on, during which the player should try to head to a safe area, to then pursue it once it passes.

Hard Shell’s shell blocks any shots that cannot penetrate enemies. As such, weapons such as Penetrator, the aforementioned Reflect, and Wave are particularly useful during the battle, as the player will otherwise have to wait for Hard Shell to expose its weak point after attempting to charge at the player, or rely on using Ignition Bombs as traps to get in some extra damage. Using Penetrator or Wave, Jason is able to directly damage Hard Shell at any time.

Using Wave, Jason can attack its weak point at any time; using proper positioning to get maximum damage and throwing a Flash Bomb to induce stun can make quick work of Hard Shell, defeating it in less than 20 seconds.

Hard Shell has no specific weaknesses, but can be stunned for 1.5 seconds (then become stun immune for 10 seconds) if its abdomen is hit by Long Range.

Hard Shell is immune to all Gun types, meaning it can only be damaged by Sub-weapons. Despite this limitation, the player doesn’t have to worry much about limited ammunition, as Sub-weapon Capsules are common drops from the bubble walls Hard Shell creates. Jason’s only opportunity to deal damage is by placing Ignition Bomb traps and/or evading Hard Shell’s charge attack and attacking its exposed rear with either a few Grenades or Ignition Bombs; the latter is more risky due to their effectiveness being limited to point blank range, but is more damaging. As most of the battle involves avoiding Hard Shell, the player should be extra careful to keep track of it when its eyes turn yellow, as health is capped at 8 and there is no Energy Guard.

The Hard Shell refight in Area 9 is much easier as the Remote Blast sub-weapon can now be used to deal damage while the mutant is facing the player. Two call-ins will suffice for taking out the boss this time and opening the portals to the next boss.

The following list shows how many shots it takes from each Gun and Sub-weapon type to defeat Hard Shell. Stun means Hard Shell will be unable to act for a brief period of time; weapons can only stun every so often in order to prevent the boss from being stun-locked. Weak means Hard Shell will take twice as much damage from the Gun than usual; in-game, they flash red, and are also stunned, when this occurs. Sub-weapons do double damage against bosses compared to enemies to mitigate their limited ammo.

Giant crabs resembling Hard Shell are now an ever-present enemy in side-scrolling areas, remaining stationary while firing three-round bursts of bubbles that trail along the ground. They are immune to Gaia-SOPHIA's cannon strikes unless first knocked off-balance by the impact of a sub-weapon.

Hard Shell appears as the mutant boss of Area 5. Attacking its central eye is the only way to damage it. It stays near the top of the arena, moving left and right, occasionally pausing. Hard Shell attacks by spewing bubbles, starting by alternating left and right bubbles, then including a third bubble in the middle, then spewing waves of bubbles with a “width” of five.

Hard Shell appears as the mutant boss of Area 5. It is described simply as a lobster. Jason defeats it while Alex, his friend who he’d recently reunited with, hides in a corner. It is revealed later that Hard Shell was apparently a mutated version of Alex’s pet lobster, Plutarch. This turn out to be untrue, as, like all of the other mutant bosses, Hard Shell is actually a projection instead of a mutated lobster, made specifically with the intent to scare Alex; Plutarch, along with Fred, are found unharmed in the end.

Hard Shell appears as the mutant boss of the Area 1 Ruins. Attacking its head is the only way to damage it, which is usually guarded by its claws. Hard Shell starts in the middle of the arena, and usually moves left and right, but can also move forward and backward, as well as diagonally. Hard Shell’s left claw is now a major claw, with its right being a minor claw. Hard Shell can shoot pink projectiles from its mouth, aimed at Alex; after taking enough damage, it’ll shoot spreads of five projectiles, with a spread of 45° between projectiles and with the middle projectile aimed at Alex. With its major claw, Hard Shell can extend its arm and try to attack with its pincers. It can also try to charge at Alex, indicated by it clicking its pincers twice.

Hard Shell reappears in the Area 3 Subterranean Lake, where it has flame breath instead of the pink projectiles. It drops the Drill Kit when defeated. 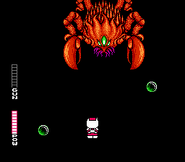