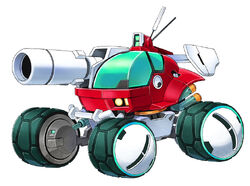 SOPHIA The 3rd NORA MA-001 "Metal Attacker" is the player vehicle of MetaFight and Meta Fight EX. Developed by Jennifer Cornet and piloted by Kane Gardner (and later Leo Gardner), it boasts superb all-terrain maneuverability and powerful weapons used to drive the Invem Dark Star Army from the planet Sophia.

Prior to the release of Blaster Master Zero 3, it is often considered identical to its localized counterpart Sophia 3rd. BMZ3 codifies MetaFight as a prequel to the Blaster Master Zero timeline, bifurcating SOPHIA III and Metal Attacker into separate (albeit similar) vehicle models. Kane Gardner reprises his tenure as Metal Attacker's pilot, serving as an early boss.

Metal Attacker's most prominent weapon is its tank cannon, capable of firing functionally unlimited laser blasts (though only three on screen at a time) and gaining greater stopping power against both enemies and destructible terrain with field upgrades.

Three flavors of sub-weapon are also available to Metal Attacker. In the Meta Fight duology, they are stocked numerically to a cap of 99.

In addition to jump thrusters that allow it to cover four to five times its height in vertical distance, Metal Attacker can have a variety of free-movement options installed.

Kane and Metal Attacker challenge Jason and Gaia-SOPHIA SV as the first side-scrolling boss of Blaster Master Zero 3 at the exit to the Sophia Force Base. Alternating between the classic weapons systems, Metal Attacker poses most of its threat from having height advantage and tight evasion windows for salvoes of Crusher Shot rounds.

This boss battle cannot actually be lost unless the player is killed while dismounted; a hit that would reduce G-SOPHIA SV to zero Life Energy will instead stun it and load the next cutscene. Once the player is reduced to critical health or successfully defeats Metal Attacker, Kane explains that his aim is to permit Jason to escape the base, while their battle corroborates an expectation that an old-model machine would have difficulty successfully detaining the recently-remodeled G-SOPHIA SV.

Resolving the battle between G-SOPHIA SV and Metal Attacker awards the "The Pinnacle of Mutant-Blasting Action" achievement on non-Nintendo systems. Defeating Metal Attacker additionally awards "Beyond the Metafight."

A Reversal of Perception[]

Tracking a dimensional rupture signal in Area ??? after Jason successfully reaches out to Eve to start the True Ending, a red-clad pilot arrives on scene with Metal Attacker to replace the since-overloaded Gaia-SOPHIA SV as the player's vehicle.

After navigating the Super-Dimensional and normal spaces of Area ??? and fighting through the four rival Metal Attackers of the previous game, the pilot reveals himself as Kane Gardner, investigating the potential threat unleashed by Jason Frudnick, now fully acclimated to Super-Dimensional Space in order to stand by Eve's side with SOPHIA-J1. The two pilots clash over their perception of the massive cocoon nearby as either a "Cradle of Calamity" or "Cradle of Hope", and the player is left to decide which Metal Attacker and pilot to command by way of an alternating title card. If the player chooses to fight the final battle as Jason, Kane will use identical tactics to the Sophia Force Base encounter above. Defeating Metal Attacker in this encounter awards the "Blaster Master" achievement on non-Nintendo systems.