"The Forest Destroyer" Mother Brain is a boss in Blaster Master Zero, appearing as the mutant boss of Area 1. It later reappears in Area 9 as the guardian of that area's map, where it is fought once by itself, and again as two individuals (Mother Brains).

As the name suggests, Mother Brain resembles a large brain. The brain portion is colored red, and it has dark yellow roots hanging beneath it. It also resembles a sort of jellyfish.

Mother Brain appears as the mutant boss of the Forest Area. Defeating it grants the Hyper Shot, which allows SOPHIA III (and EX characters, if playing in EX Character Mode) to destroy the wall monsters.

Mother Brain starts by latching onto the ground for a brief period of time, during which it’s invincible. Afterward, Mother Brain will produce eight smaller brains that orbit around it. It will then follow the player in a rectilinear fashion, only changing direction upon making contact with a wall. The eight small brains initially produce a large orbit around Mother Brain, but it eventually gets smaller, after which Mother Brain throws the mini brains outward. Mother Brain will then follow the player again before stopping and latching to the ground to produce more brains. After this, it can either have the eight orbiting brains again, or it can spew out a continuous stream of small brains aimed at the player; the latter attack requires Mother Brain to be grounded for longer.

When Mother Brain summons the mini brains, it is usually best to stay inside their orbit when it is large and then escape right before it becomes small. When Mother Brain shoots a stream of brains, the player should move along the perimeter of the arena; depending on the position of Mother Brain, the player should move more slowly if it is in a corner and can move faster is it is near the center. Mother Brain’s mini brains can be destroyed, which can cause the orbiting attack to end prematurely, however, this will not end its brain spewing attack early. Since Mother Brain always does the orbit attack first, Jason can throw in a Grenade as soon as they are summoned to get rid of them immediately; some Gun types can do this effectively as well.

Using Flame, Mother Brain’s brain spewing attack can backfire, as igniting one of the mini brains causes a chain reaction of igniting any other mini brains that make contact, leading back to Mother Brain itself. Igniting orbiting mini brains as Mother Brain summons them is also a very effective way of dealing massive damage as each burning minion deals Flame's direct damage to the boss on contact

Mother Brain is weak to Flame, causing it to be stunned for 1.5 seconds (then become stun immune for 10 seconds) and taking more damage than usual. Using Flame’s extra damage and stun, as well as the mini brain ignition effect, can make quick work of Mother Brain, defeating it in less than 10 seconds.

Mother Brain is immune to all Gun types except Blaster and Auto. If Jason has Auto, he should stay relatively close to increase the accuracy of Auto, as well as being able to avoid the mini brains when they are orbiting. Grenades should be used to get rid of some, if not all, of the mini brains, as they serve as Mother Brain’s main form of offense; it is usually best to keep a few around so that it continues to chase Jason around instead of preparing for another attack.

If Jason does not have Auto, he’ll have to use Blaster. He can still employ the same strategy, but to a less effective extent. The mini brains can also drop Gun Capsules, potentially allowing Jason to obtain Auto.

The Mother Brain fight in both Boss Blaster modes functions similarly to the Normal Mode version, with the only difference depending on the number of players:

The following list shows how many shots it takes from each Gun and Sub-weapon type to defeat Mother Brain. Stun means Mother Brain will be unable to act for a brief period of time; weapons can only stun every so often in order to prevent the boss from being stun-locked. Weak means Mother Brain will take twice as much damage from the Gun than usual; in-game, they flash red, and are also stunned, when this occurs. Sub-weapons do double damage against bosses compared to enemies to mitigate their limited ammo.

Mother Brain has been downgraded from a boss to an ordinary enemy encountered in side-scrolling mode from Planet Montoj onward. Their patterns are simplistic, spewing destructible mini-brains in a prolonged stream or in an outward orbital.

Mother Brain appears as the mutant boss of Area 1. Her only form of attack is chasing the player. She also has the mini brains orbiting her, which cannot be destroyed; their orbit also changes from a circle to a diagonal ellipse, giving the player less room. Due to the proximity, Grenades are the most effective way to defeat Mother Brain.

Mother Brain appears as the mutant boss of Area 1. It is described as having “lumpy skin palpitating like a human heart,” and has fireballs orbiting it instead of brains. These fireballs create an invisible barrier that blocks any of Jason’s shots, meaning he has to get inside the ring of fireballs to be able to attack.

After the first encounter with the real form, the Plutonium Boss casts holographic forms over the rest, of something that would either terrify Jason or invoke such emotions that would make him unable to fight, such as with Fred.

Mother Brain is named Cramitor and characterized as the ringleader of the mutants. 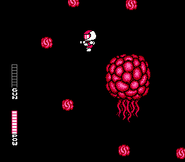