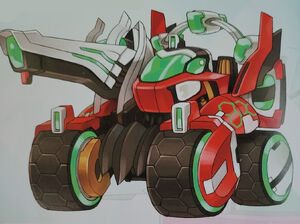 Sophia-J1 is a Metal Attacker appearing exclusively in the True Ending of Blaster Master Zero 3, both as a playable vehicle and a final boss. Its model number is EARTH MA-J1.

Some time later, Jason and Eve begin a plan to conceive children of their own using a special mutant cocoon. Fearing that this plan will attract the attention of Kane Gardner and the Sophia Force, Jason reaches out to the other MA pilots to help delay Kane, and readies Sophia-J1 to protect their 'Cradle of Hope' until Eve gives birth. At the final confrontation, the player can choose to either play as Jason and battle Kane's Metal Attacker, or play as Kane and battle against the Sophia-J1, by waiting until the title card for the final bout displays the preferred hero.

After Eve gives birth to Elfie and Roddy, resolves the misunderstanding with Kane, and drops the children off with Leibniz, the Sophia-J1 crew blast off through dimensions to fight the Lightning Beings that disobey Eve, for the sake of their children's future, and just maybe, a future Jason and Eve can share with them.

Sophia-J1 possesses identical abilities and weapons to Gaia-SOPHIA SV, and begins the fight with a full top-off of HP and Gaia System energy. If brought to zero HP, Eve will bestow a super-dimensional blessing consisting of 2 HP regen per second and a barrier capable of withstanding some projectiles.

While under AI control as a boss, Sophia-J1 exhibits both its player-usable capabilities and an ability to warp under its own power to begin and end attack patterns (it is unclear if this is a property of its construction in Super-Dimensional Space or assistance from Fred). To the left of Sophia-J1's HP bars is a display of its activated weapons loadout. This is always displayed with the G-Crusher Shot on the right and an upcoming main or sub weapon on the left.