“The Galaxy Master” Underworld Lord is a boss in Blaster Master Zero, appearing as the mutant boss of Area 8.

The Underworld Lord resembles a knight. He wears red armor, with notable features including a helmet with long yellow horns, shoulder pauldrons each with a curved spike, and upward pointed toes. In Blaster Master Zero 3, Goez-R has the same body structure as the Underworld Lord, except it has less armor, is colored green, and its head resembles a GX680.

The Underworld Lord, also referred to in-universe as the Mutant Lord, is the pseudo final boss of the Blaster Master portion of the game, appearing as the mutant boss of the Mutant’s Inner Body Area. He serves as the main antagonist of said portion of the game, being directly responsible for the mutant threat on Earth. Defeating him results in him transforming into the true final boss of the Blaster Master segment, the Multidimensional Overlord.

The Underworld Lord starts in the middle of the arena. He only attacks using a plasma whip. After positioning himself relative to the player, he holds his arm up before flinging his whip forward, which can be aimed up to 45° to his left or right. The Underworld Lord is also capable of facing each of the four cardinal directions, allowing him to attack at all angles.

As the battle serves the player more at close range than at long range, any long range benefits from various Gun types are negligible. As such, Gun types that excel in close range, either due to range limitations, such as Blaster, Diffusion, Auto, or Flame; or due to higher rate of fire, such as Long Range and Striker; are no longer hindered by some of their weaknesses.

The best strategy to use involves placing down a Turret to distract the Underworld Lord so that Jason can more safely deal damage to him. Remote Blast and Ignition Bombs can also be used to speed up the fight, however, the player may wish the reserve these for the oncoming fight against the Multidimensional Overlord. Of the Gun types that have limited range, Flame is the best option, followed by Diffusion, Blaster, and Auto; Auto is not recommended due to its lacking damage output, even when up close to maximize accuracy. Of the Gun types that have limited projectiles that can be be mitigated when used in close range, Striker is the better option of the two; Long Range still works well, though, doing better than any of the Gun types with limited range.

Penetrator, while not benefiting in the same way most of the other Gun types do due to its unlimited range and ability to penetrate enemies while only being allowed to have two projectiles on screen at a time, is still a decent option, being better than Auto, and can be better than Blaster when using careful positioning to make its projectiles have minimal time on screen.

Reflect is a useless Gun type against the Underworld Lord, as he has no projectiles.

Using Striker is the best option; Striker’s high damage output at close range and use of a Turret as a decoy can make quick work of the Underworld Lord, defeating him in less than 6 seconds.

The Underworld Lord is immune to all Gun types, meaning it can only be damaged by Sub-weapons. Jason should use a Turret to distract it, then use up all of his Ignition Bombs, followed by Grenades. Remote Blast can also be used, but as previously stated, it may be preferable to reserve it for the Multidimensional Overlord.

The Underworld Lord appears as the second mutant boss of Area 8.

He is the main antagonist of MetaFight, where he is named Goez. He is the leader of the Invem Dark Star Cluster, and is responsible for invading the planet Sophia the 3rd, which is the setting of the game.

The Underworld Lord’s role is never explained in Blaster Master, as the instruction manual makes the Plutonium Boss out to be the main antagonist, possibly because he appears on the game’s boxart. The Underworld Lord’s only mention in the manual is the portion depicting almost all of the game’s Mutant Bosses, where he is referred to as the “Master Boss” and being the most powerful of all. There is also no backstory regarding a planetary invasion, as the main plotline involves Jason chasing after Fred, his pet frog; the mutants are a result of radioactive waste, and are not part of an affiliated army of sorts.

The Underworld Lord always faces downward. He can move rather quickly on his feet, allowing him to approach Jason and damage him either by contact or by lashing his whip out at him. Standing to the side of the Underworld Lord and using Grenades is the best strategy; however, the player will need to move out of the way and attack from his other side in order to prevent being cornered or whipped.

Jason is initially forced to fight three clones of the Underworld Lord, referred to as Goez-R, simultaneously during his initial escape from the Sophia Force Base; after this initial encounter, he will then begin to encounter individual Goez-R enemies while traversing super-dimensional space. Like their predecessor, these clones side-step frequently and can deploy a plasma whip; unlike their predecessor, they also have access to a bullet-storm attack, but are now vulnerable to being stunned by the Reflex Striker Blast Counter. 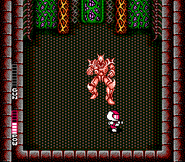